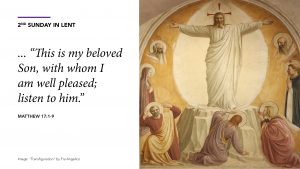 ON the second week of Lent, we read and reflect on the Transfiguration of Jesus. The event that Matthew, Mark and Luke tell us took place up a high mountain. The Transfiguration is an episode that gives us a glimpse of both Jesus’s humanity and his divinity. Here Jesus is also able to reassure his friends – and us – that there is no need to be afraid, even as we witness such extraordinary events.

Undoubtedly, the purpose of the transfiguration of Christ into at least a part of his heavenly glory was so that the disciples could gain a greater understanding of who Jesus was. Christ underwent a dramatic change in appearance in order that the disciples could behold him in his glory. The disciples, who had only known him in his human body, now had a greater realisation of the deity of Christ, though they could not fully comprehend it.